The deadline for established vape shops to move away from Utah grade schools came and went earlier this month, with a number of retailers threatening to sue the state rather than budge from their current locations.

The brewing struggle between e-cigarette businesses and state lawmakers has also pulled city and health officials into its orbit — with attorneys for vape shops urging local regulators to sign agreements not to enforce state law for the time being.

Despite the Legislature’s recent effort to delay the fight until next year, the threat of a lawsuit still looms as attorneys representing the vape shops contend that the state’s mandate would put their clients out of business.

However, the state had previously granted an exemption to vape stores that opened before lawmakers created the 1,000-foot buffer around these community locations, reasoning it would be unfair to punish businesses that had tried to follow the rules. This exemption also gave shops a few extra years to adapt to the law, applying to any retailer that opened before 2016.

Then, earlier this year, lawmakers scrapped the provision that had given these shops freedom to do business near schools. The retailers had until Aug. 15 to move out or close up, according to this bill, HB23.

The problem is that, because of the proximity restrictions, there’s virtually nowhere for them to go, according to attorneys for a number of the affected vape shops.

“Due to these regulations on these businesses that have been operating legally, some of them for 10 or 20 years, you would effectively be taking their business from them,” Walter Romney, attorney for some of the shop owners, said in an interview.

Romney said none of his clients has moved to a new location. Only one has been able to find a possible relocation site — an old car dealership that backs up against a freeway.

“There’s places to relocate,” the Clearfield Republican said. “But you’re not going to be near kids, which is the whole idea.” 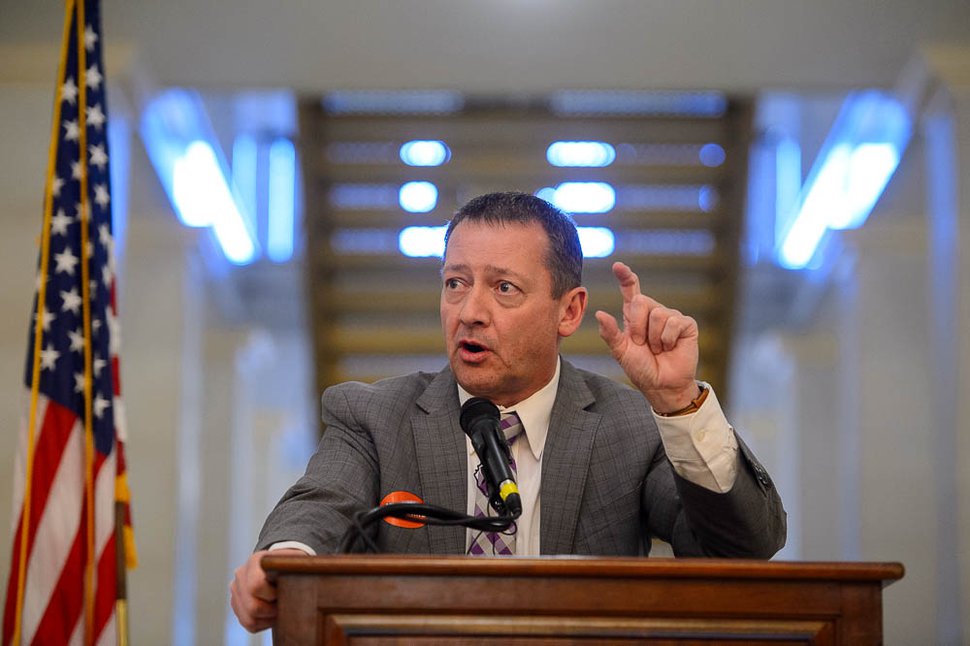 In response to the threat of a lawsuit, state lawmakers last week delayed the Aug. 15 deadline, giving the shops until July 1, 2021, to pack up and leave. With that date pushed into next year, Senate Majority Leader Evan Vickers, R-Cedar City, said state lawmakers have time to revisit the issue during the next 45-day general session in January and make any necessary changes.

It’s an accommodation that rankled Ray, who called vaping an “epidemic worse than our pandemic” during a speech on the House floor and initially persuaded his colleagues to reject Vickers’ solution.

Later in the day, House lawmakers reconsidered and passed the bill, which now awaits Gov. Gary Herbert’s signature or veto.

But it might not be enough to stave off a lawsuit. Kody Condos, another attorney for the vape store owners, told state lawmakers that giving her clients an extra year to relocate would simply delay the inevitable and petitioned legislators to strip out the deadline completely so the shops could continue to do business near K-12 schools.

“We appreciate the Legislature’s willingness to try and kind of kick the can down the road, but, unfortunately, this doesn’t solve the problem,” Condos said, later adding, “We’re still going to be put out of business.”

Making matters worse, there’s little chance of selling a business that’s on a timetable to close up or move, she argued — meaning that the state-imposed deadline essentially drains these shops of value and leaves their owners with no recourse.

Vickers said a lobbyist for the vape shops texted him after the special session bill passed and thanked him but said the businesses would likely sue the state regardless.

“I just said they’re free to do whatever they like,” he said.

The attorneys in May sent their notice of a possible suit to the state, also directing it to local leaders in Salt Lake and Utah counties and city officials in Sandy, Taylorsville, Murray, Lehi, Draper and West Jordan. A drafted complaint attached to the notice lists six specific vape shops, including Murray Vapes next to Murray High School; B’s Smoke Shop near Lehi High School; and Smoke City near West Jordan Middle School.

However, Romney estimates that between 30 and 40 vape shops are affected by the Legislature’s mandate to move away from schools.

In a Thursday interview, he and Condos said their clients are good corporate citizens and are extremely careful not to sell to minors, a violation that could put them out of business.

“It’s not like the bell rings at high school and they’re saying, ‘Hey, let’s go to a smoke shop and buy vape,’” Romney said.

On the other hand, Ray says that’s exactly what parents tell him their kids are doing.

“I’ve not seen any good actors in the vape industry,” he said. “I mean, look at their marketing targeted toward kids.”

Attorneys for the shops said they’re hopeful of finding common ground with state lawmakers in the next general session but aren’t sure if they’ll refrain from filing the lawsuit before then.

Vickers said that by clearing up some ambiguity in the law, his bill, SB6008, likely puts Utah officials on stronger ground if the shops do end up taking them to court.

The bill cleaned up some language on the permits issued to tobacco specialty retailers and clarified the definition of a school. It also eliminates a requirement that many established vape shops move away from sensitive locations such as playgrounds, libraries, day cares and neighborhoods by July 1, 2022, as would’ve been mandated under HB23.

Vickers said he didn’t intend to strip out the provision forcing the e-cigarette retailers away from these community sites, adding that he anticipates lawmakers will revisit the change in a future session.

Attorneys for upset e-cigarette shop owners have also reportedly been pressing local health departments and cities to sign a pledge that they’ll hold off on enforcing the new state regulations for vape retailers. In late July, House Speaker Brad Wilson, R-Kaysville, and Senate President Stuart Adams, R-Layton, wrote a sharp rebuke of any such refusal to follow state laws.

“Signing an agreement or otherwise declining to enforce a statute is not an acceptable remedy; in fact, it violates the constitutional requirement that the executive branch and local governments ensure that the laws are faithfully executed,” they wrote to the Utah Association of Counties. “Agreeing not to enforce a statute undermines the principle of separation of powers and the political will of the people of Utah expressed through their elected representatives.”

Romney acknowledged that his firm asked cities and health departments to sign nonenforcement agreements but only as a stopgap measure since lawmakers were expected to change the rules during the August special session. The discussions weren’t meant to be threatening, he said, adding that his firm’s interactions with counties and cities have been positive and productive.

But the pressure from all sides has put local and health officials in a bind, said Victoria Ashby, director of government relations for the Utah League of Cities and Towns. On the one hand, they didn’t want to disregard state law. On the other, they were wary of getting embroiled in litigation at their residents’ expenses.

Ultimately, Ashby said, many of them decided to hold off on enforcement at least until the special session, when they expected state lawmakers might make adjustments.

“The bottom line is that the cities were just caught up between this fight,” she said. “We want to enforce the law, but we also have to make a choice as to whether we’re going to incur these potential damages.”

The Legislature’s decision to bump the deadline into next year shows the cities “made a prudent choice on behalf of their taxpayers,” she added.